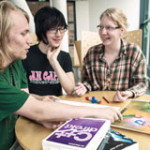 Below you find examples of quotations, paraphrases and general references. The examples come from: Giger, Peter (2010). Conversation and figuration from the horizontality of the 2.0 decade. Diss. Karlskrona : Blekinge tekniska högskola, 2010

Your academic texts build partly on previous research done by others and you need to indicate what research you have used in your own work. A common way of doing this is to paraphrase, which means that you summarize and rewrite (synthesize) a text in your own words. It is important that you name the source from where you got the information for your paraphrase.

My view is mainly based on the writing of the Swedish intellectual historian Sven Eric Liedman. In his book I skuggan av framtiden (In the Shadow of the Future) (Liedman, 1997), he draws the line back to the enlightment, seeing the hard and the soft as two parallel, simultaneous enlightment projects. Hard knowledge is the rational empiric paradigm, or the Sciences, including statistics and “quantitative” methodologies from the social sciences giving “hard results”.

You can find another example of how to paraphrase in the anti-plagiarism tutorial Refero. You find it in the section on paraphrasing. (Open the guide, switch to English and use the Table of contents to find the section)

Remember!
In most subjects, direct quotes are used sparingly. It is usually better to paraphrase with your own words. One exception is literature studies, where it is common to work with quotes that are commented on.
When someone has expressed something very well or striking, or if you risk altering the meaning by rephrasing it, there may still be reason to use a direct quotation with the exact same wording as in the source. A shorter run-in quotation should be placed within quotation marks, and can be part of the text. Example of a run-in quotation:
A plateau in this sense is “any multiplicity connected to other multiplicities by superficial under-ground stems in such a way as to form or extend a rhizome” (Deleuze & Guattari, 1987, p. 22).

Cyborg reality is both Kevin Warwick’s cyborg project and the fictional cyborg in the Terminator movies.

Contemporary science fiction is full of cyborgs – creatures simultaneously animal and machine, who populate worlds ambiguously natural and crafted. Modern medicine is also full of cyborgs, of couplings between organism and machine, each conceived as coded devices, in an intimacy and with a power that was not generated in the history of sexuality. (Haraway, 1991, p. 149f )

Most people living in the western world are cyborgs in the sense that our bodies are partially regu-lated by medical technology.

When you want to give a broader picture of a research question, you can refer to one, or several, more important sources that you used, without using a direct quotation or a paraphrase. Also in such cases, you must state clearly what you are referring to.

There is plenty of secondary literature about using the rhizome as a representational figure. Nick Mansfield has a chapter about Deluze and the rhizome in Subjectivity: Theories of the self from Freud to Haraway (Mansfield, 2000). The rhizome is both a metaphor for the “self”, the person, and the connection between persons, in what could be called ‘conversations’. In other words, conversations are rhizomes and they grow or evolve rhizomatically. Dan Goodley uses the rhizome concept to discuss parenting disabled children (Goodley, 2007). Others have used it as a representation to understand a particular academic discipline, discourse or conversation (e.g. Seijo, 2005 or O’Sullivan, 2007). Another popular subject for the rhizome metaphor is the Internet (Hamman, 1996).

To avoid plagiarism, it is important that you make clear references to your sources, whether you make a direct quote from a source, or if you write a paraphrase in your own words. Also remember that you plagiarize if you include a quote that is several pages long, even if you name the source.

You can read more about copyright here in the Writing guide.

Refero is a web based guide which was developed to help you, as a student, to understand what plagiarism means. You also get tips on how you can quote and paraphrase correctly, in order to avoid plagiarizing.